At the end of a weekday, time is short and so are ingredients. Let’s look at how to make a healthy version of Broccoli Soup on a weekday in fewer than 20 min, provided you have pre-made vegetable stock (You can use those stock cubes from the supermarket if you don’t have homemade stock) 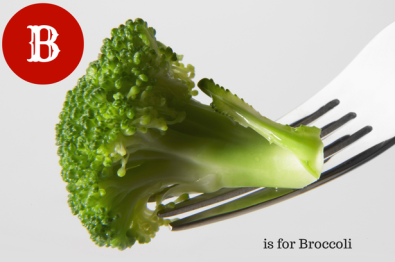 Things to grab from the fridge:

Things you need from the pantry:

Check seasoning and enjoy with brown bread and no guilt.

Veg stock, always in stock at home. Someday I’ll post a recipe when I perfect it 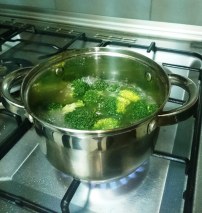 The florets soaking up the lovely stock! 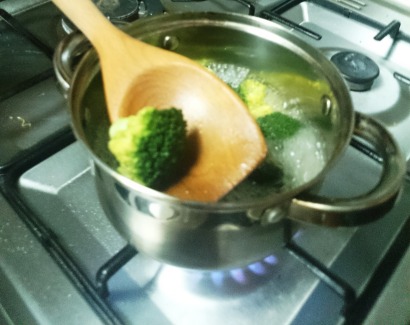 Not a great shot but you get the idea right? 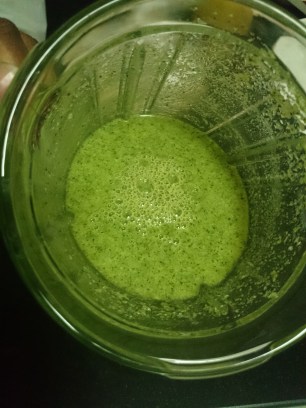 Blitzed and ready to go! 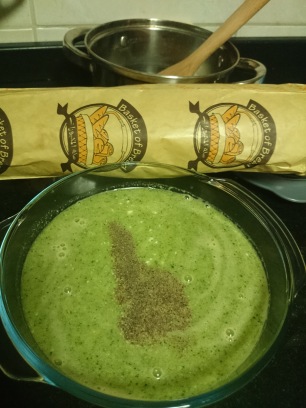 Ready to go with a brown baguette

Note: You can season this soup to your liking, sprinkle nutmeg or cumin, increase garlic or crumble cheese on top. This is a soup for all moods 🙂

If you are currently taking blood thinning medication, it is recommended not to take excessive amounts of broccoli. Normal portions are still good for you. Drink copious amounts of water if you eat more that 2 cups of broccoli every day.

What would you do, if you prepared a nice dinner for guests and realised that you were sorely lacking in the appetizers section?

The guests are less than 30 minutes away and you hardly have anything ready… This is what I was faced with recently.

So here is what happened:

Open fridge in near panic – Spotted nothing but carrots, cucumber and Zucchini.

Took a deep breath and got started.

Things to pull out of the fridge: 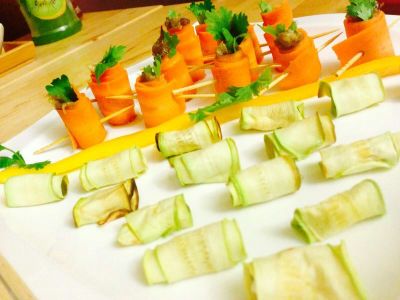 Parsley or Coriander Leaves for garnish

Things to source from the pantry:

Turn the oven on.

It was a hit and took under 30 mins to make with a bit of multitasking. But I didn’t break a sweat and licked the melon baller clean, so it’s all good! 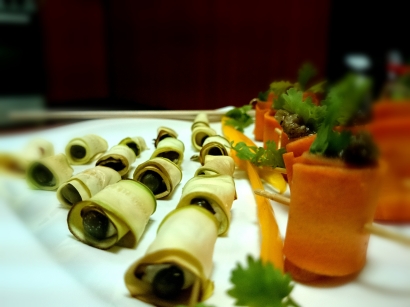 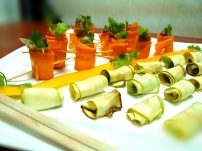 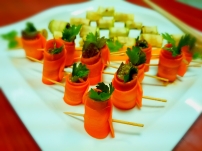 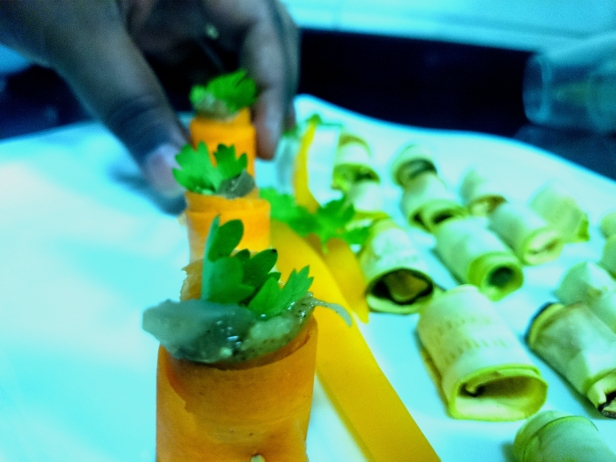 This post is to start off the A-Z challenge 2014. Check it out here. There are a massive list of bloggers and I shall visit as many as I can and leave a kind word. Between exams, assignments, projects at work and entertaining visitors, this is going to be one heck of a challenge, I’m trying hard to keep myself motivated  to complete this challenge.

After a long day at work, slaving over a hot stove was the last thing on my mind. A quick survey of the fridge revealed a decent load of produce and no leftovers.

Hmm… Secretly thanking my stars for buying those large mushrooms on sale, I started off…grabbed some mushrooms and some vegetable…a quick sauté here,filling there, stick it in the oven and Voila!

Here is what you’ll need

Garlic-2 or 3 (according to your tolerance)

Herbs- I tablespoon of chopped parsley or celery leaves

Yogurt – Served on the side, or sour cream or just plain omitted

As an afterthought I realised that I had some tomatoes on the vine and freshly sliced olives from the deli. I washed the tomatoes, poked two holes in each, seasoned lightly, drizzled ½ tablespoon of olive oil and put them in the baking tray during the last 10 mins and threw some olives on top of the mushrooms. At this stage you may add cheese if using.

Served hot from the oven on a bed of fresh spinach with yogurt on the side… the yogurt looks green because it met the blender blades along with mint, cilantro and half a green chilly with some salt. 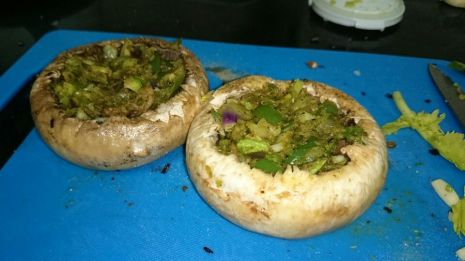 Bed of spinach in a tin older than the sun 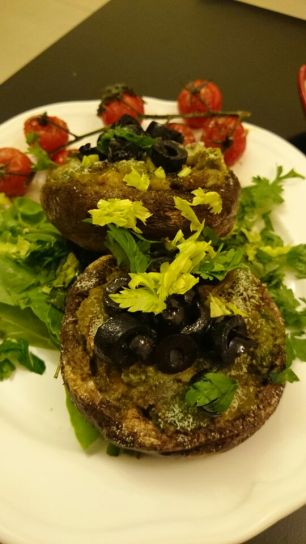 Come at me yummy plate 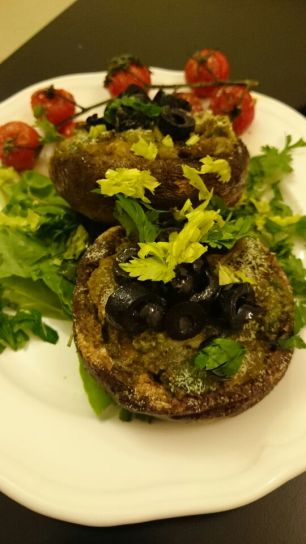 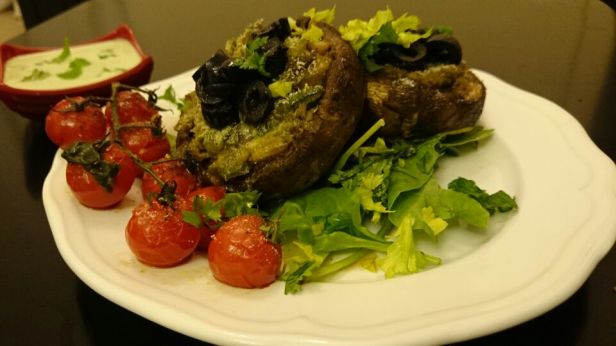 The mushrooms juicy and not rubbery, vegetables tender and steaming, spinach with the wonderful juice from mushrooms… mmmm…

Note: You can use butter instead of oil for sauteing and cream cheese instead of yogurt  for rich flavor and displaying anti-diabetic sentiment. But for obvious reasons, I have used substitutions.

Gourmet version of a humble meal.
Eva truly understands flavors and her passion is infectious! Beautiful photos, thank to her husband and elegant blog design makes hers the first ever Food Blogger to be reblogged on Soulsez.
Please feel free to leave comments on her website. I hope I didn’t freak you out with the title of this post. What the heck is angelica acutiloba??? Well, we Chinese don’t call it like that obviously.  We call it ‘当归/Dang Gui’ or ‘Dong Quai’; and it is commonly known as one of those super Chinese herbs that cures almost everything particularly for women. 😉 A must have Chinese medicine for people who are physically weak like women who just gave birth or people who had a surgery. I already knew about Dang Gui since I was a kid because it was often added in our soup and chicken dishes. It has a distinct herbal aroma and bitter in taste. I’m sure you already know about goji berry. I didn’t know that it was a super food, but my grandmother used to tell me that goji berry is good for your eyes. She also used to tell…

Archana is an eclectic blogger from Chennai, India. Currently residing in UAE, she is fascinated by writing almost as much as she is fascinated by the man of her dreams, her husband J.
She works as a Corporate Language Trainer and doesn't let it interfere with her blog as is evident from some of her weird posts.
Archana respects your opinion and welcomes civilised debates. So go on and drop her a line or two :)