The year was 2010… getting married was the most amazing thing that happened to me in life. As I reveled in the blessing that was my husband, I never planned for one of the major responsibilities that married couple share – Cooking.

Growing up I had always held duties that involved, climbing, electrical equipment, automotive, dirt, elbow grease… you get the drift. Doing the dishes was on my list of Culinary Skills and that made my entire list.

We lived in a studio apartment in Dubai. There I was in the tiny kitchenette. Pots and pans were there. There was a stove that I could manage to turn on and off. ‘Keep it simple’ I told myself. Rotis (Indian flatbread) and Tomato Chutney would have to do. After a few frantic calls to mom and firefighting lessons revised I set about creating the most horrendous Tomato Chutney in the history of civilisation. All you have to remember is that it had ketchup, habanero sauce, tomatoes, green chilies and a host of other ingredients. My sweet Ji made a few jokes about it to make me feel better and whipped up dinner in no time. I was in awe of the man.

For a person whose career warranted public speaking, I had no confidence in the kitchen. To add salt to the wound, one of our close friends said “Poor him [my husband], he loves to eat… how sad” to which my husband promptly replied “Lucky her [me] I love cooking for my wife”

Beaming with pride, I came home with a slightly troubled heart all the same. Is cooking so unbelievably complicated? Can the mile long Indian recipes never be conquered? Am I so retarded that I cannot follow instructions in plain English? Food was always something that was on the table at home. Mom’s recipes were dutifully appreciated and eaten with as much table manners as possible. Never did I think that there was more to food.

Ji offered to show me the basics. It was embarrassing standing there trying to get a grip on the darn tomatoes whilst my eyes flooded with tears from the stupid onions I had just butchered. Not one piece looked symmetrical and I marvelled at the way Ji could chop and dice and season and not break a sweat. When I burnt the onions he smiled; when we had to throw away a pot because of the congealed mess at the bottom, he brought me a single red rose; if the eggs had shells in them he calmly picked them out and kissed me. A month in and the (air quotes) friend made her comment again. This time I didn’t feel hurt. This time I knew that my cooking will improve. Over the months my love for produce and baking grew. Mom bought me a microwave with convection option. The pineapple upside down cake I made using it was a hit. Slowly I graduate to baking our own bread and grilling chicken with it. When the microwave broke down, I mourned for the loss of a friend.

The first anniversary dinner featured pasta, a loaf of bread and a cake decorated like a gift box (cheesy right?). I did throw cheese and ham into the pasta so he would like it regardless, turned down the lights and lit up candles so the fare won’t look so bad… We passed on the bread because I was found to have been a tad heavy handed with the yeast.

The second year of our wedding, we moved to a larger one bedroom apartment overlooking a creek. The second anniversary dinner featured baked chicken and herb sauce, some steamed veggies, cream of chicken soup, grilled eggplant, a salad… Dessert was a triple layered berry crumble topped with ice cream. Passion for cooking was growing along with my love and happiness in our marriage.

Slowly, my death grip on recipes and measurements loosened. Having been an inquisitive child, the array of products available for experiments excited me. Friends and family had good things to say, Ji continued to be my rock. If something tasted awful, I’d know from him. Indian recipes that seemed scary at first became easier to comprehend. My father – in – law and mother – in – law gave me pointers about their cuisine (Kerala, India), my mother about ours (Tamil, India). Continental and baking tips I read and learnt from various blogs and chefs.

Beef was my nemesis. Being allergic to red meat, there was no way to taste it. Having never eaten it growing up, this delicacy favoured by my in-laws and husband stared at me in the face.

A lover of all Kerala style beef dishes, Ji was enamoured with one style of beef. On one occasion I attempted Ji’s number one -all time – all-star – favoured in every fancy restaurant – the king of all dead animal related meals – The Steak.

The rubber disk like, chew till your jaw seizes up, grey unappetising block of meat I produced was received with gentle appreciation and feedback that it was a bit tough but still good for a maiden attempt. I felt pretty good – until I saw Gordon Ramsay throw out a steak that looked remarkably like mine and told a shaky chef where she could shove it. Damn! My confidence was wavering. It was the one thing that my Ji loved and there was no way to learn how to overcome that hurdle. Gordon Ramsay looked like someone who knew what he was talking about, so I scoured the internet looking for his tutorials and reading.

Telling myself that I was no longer the culinary virgin in the family, plans began to take root for our third anniversary dinner.

The third anniversary dinner(last week!) featured his favourite Gnocchi, lobster bisque (a cousin gave us a last minute lobster surprise!), breaded calamari rings, mashed potatoes and of course a surprise steak with rum glazed mushroom and shallot sauce… as he cut into the steak I remember feeling a rush. God please let it be rare … (medium-rare is ok too) let it taste decent, please… I won’t trick Ji into doing the laundry weeks in a row I swore. Dessert was farthest from my mind… the fried ice-cream just needed to be fried. Ji had been fascinated with the ‘fried ice cream’ concept when I had mentioned it and he was looking forward to it… But my steak Dear Lord Jesus! – You heard about the laundry duty right? Please… I begged.

I smiled while loading the washing machine this morning 🙂

Click on the first photo and just fly through the gallery. 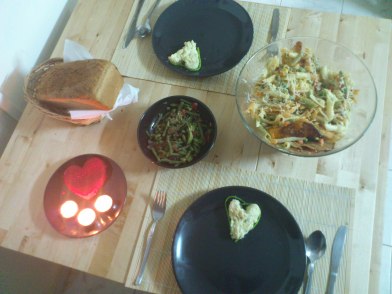 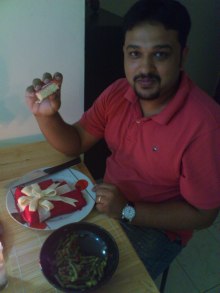 Anniversary 2011 – The dessert. Simple vanilla sponge with the cheesy decoration! 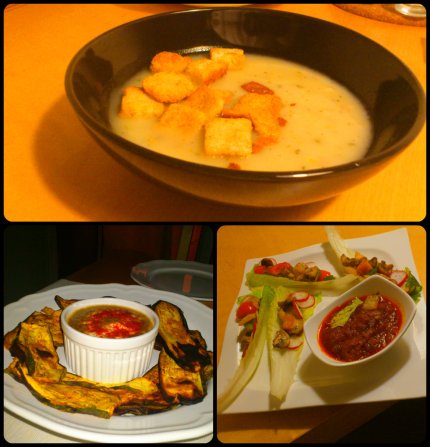 Anniversary 2012 – well we were a little too enthusiastic about dessert… 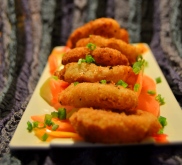 Anniversary 2013 – Breaded Calamari on a bed of citrus salad 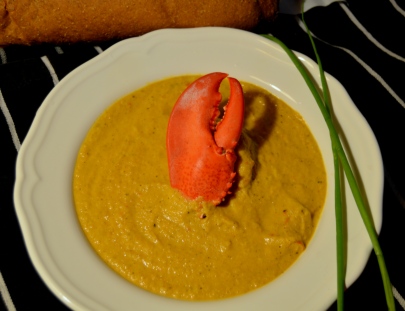 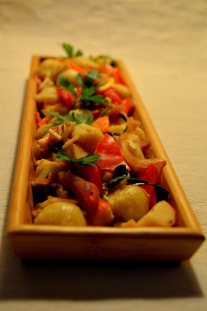 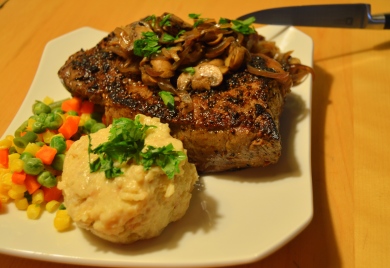 Anniversary 2013 – After a nerve wrecking wait… the cook looks good!

Anniversary 2013 – Aha! Piping hot on the outside, frozen chill ice cream on the inside with a drizzle of raspberry infused warm honey. Literally gone in 10 seconds!

Archana is an eclectic blogger from Chennai, India. Currently residing in UAE, she is fascinated by writing almost as much as she is fascinated by the man of her dreams, her husband J.
She works as a Corporate Language Trainer and doesn't let it interfere with her blog as is evident from some of her weird posts.
Archana respects your opinion and welcomes civilised debates. So go on and drop her a line or two :)